There’s something about dolphins and whales which fascinates us as humans. We are obsessed with them – whether we are staring at them, trapped inside a tiny tank, desperate to get as close to them as possible, or whether we’re out in the middle of the ocean, we find ourselves mystified by their size, their intelligence and their emotions. I’m definitely one of those people, my bedroom spent a good ten years of my childhood completely covered in dolphins, whales and sharks. I was infatuated by them. If I could have been Jesse in Free Willy I would have. So during my most recent trip to California, the Pacific Ocean called to me, and I ventured on board a boat from Newport Harbour, and chugged out into the deep blue sea.

Newport Harbour has a few options for Whale Watching, and different times of year mean different animals are on view. Grey Whales venture along the Californian ghost throughout the wintertime, headed for Mexico where they’ll breed and then return up the coastline with their young in the later spring. This is a great chance to see a whale calf in the wild, and often the parents are moving a little slower on the return journey! During the summer months and early autumn, the mind-blowing Blue Whale migrates past the West Coast. I’ve yet to witness a Blue Whale, and it’s absolutely top of my list. I’m told that Minke Whales and Finback Whales are also spotted off the coast of California, and Humpbacks can be seen as well. Plus, pretty much all year round there’s a decent chance of seeing a pod of common or bottlenose dolphin. As with any wild animal encounter, there is never a guarantee that you’lll see anything but the Pacific Ocean is so vast and impressive that even without the puff of water coming from a whale’s blowhole on the horizon, you’ll still have a wonderful trip on the water.

Budget conscious as ever, I checked out the local Groupon deals and found that Newport Landing Whale Watching worked out by far the best value at around $13 for a 2-hour trip. I walked down to Balboa Fun Zone and there collected my ticket, picked up a pre-trip coffee and waited to board. They’re pretty strict on you being ready at least 30-minutes prior to your boat leaving, so leave plenty of time. If you’re driving down to Newport there’s a multi-storey parking structure just behind the Fun Zone which is probably your best bet. Other than that, bring a hat, maybe some binoculars, a fully charged camera and some sun cream and you’re good to go!

I was there in early May, just outside of school holidays so the boat wasn’t too busy meaning you could wander around get get good views almost everywhere you went. Even as we slowly made our way through Newport Harbour, out into the ocean, the wildlife began their show, with huge flocks of Californian Brown Pelicans resting on the harbour rocks, and harbour seals flipping and flopping gently in the still water. I took my seat at the back of the boat and enjoyed the breeze and sound of the waves but barely five minutes out into the open ocean we heard the first “Ooooh!” as a pod of common dolphin decided to join us for the side, jumping through the surf of the boat, racing past us. The Newport Landing captain and his team were knowledgeable and respectful of the animals, keeping us moving but also making sure we had plenty of time to enjoy the dolphins and get some snaps!

Their knowledge and respect for the ocean paid off, as around an hour into the trip the boat suddenly slowed and right on cue, the puff of mist from a large, female grey whale who decided to hang out in clear view of the boat. Anyone who knows me, knows I get a little misty eyed when I see a whale up close and it all almost became too overwhelming when her perfect little (I mean, not that little, he’s still a whale) calf suddenly breached in front of us. They were hugging the coastline on their journey north from the warm shores of Mexico. Unsurprisingly another boat turned up to view the whales, they edged closer to the animals, and then a drone took off from the boat, whizzing and whirring over us and the whales which was all in all a less than serene experience to be honest. However, I refused to let any of that get in the way of my love for the ocean and adoration for the whales. 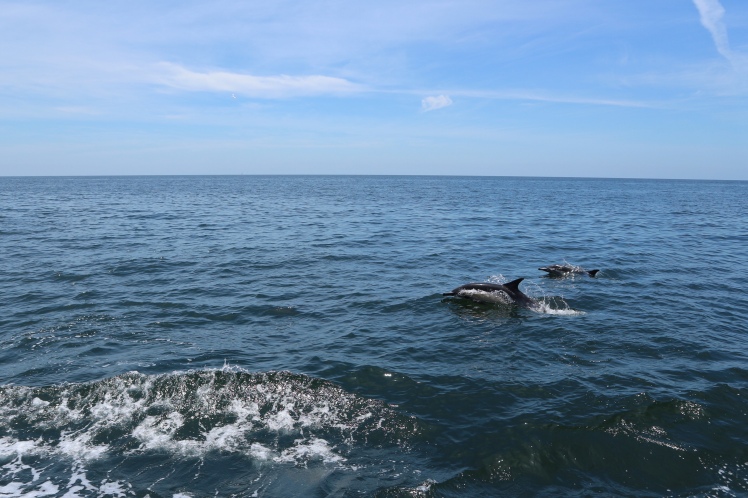 One thought on “Travel| Whale Watching at Newport Beach – California”