As the orchestra began the overture of Top Hat at The Churchill Theatre last night, the packed audience knew we were in for a treat of lush sounds, filled with melodies we know and some that a deep recess of our brain recognises. The huge art deco set loomed over The Churchill’s impressive auditorium, instantly transporting us back to a bygone era.

Top Hat, a collection of Irving Berlin’s greatest tunes, is a high energy production filled with breathtaking dance routines that really showcase the talents of the entire company. There is something so eternally aesthetically pleasing about a group of men in top hats and tails doing a slick tap routine, and the finale to Act 1 demonstrates this with style and accuracy unlike anything I’ve seen on stage before.

The lead actors in Top Hat must be the archetypal ‘triple threat’; with acting skills to carry a flimsy Gilbert & Sullivan style plot, singing with power and emotion and to top it all off they must be superb dancers. Alan Burkitt takes the lead role as Jerry Travers and performs with talent and sincerity that brings heart to a perhaps otherwise egotistical character. Rebecca Thornhill gave a superb performance as the long suffering and witty wife of Clive Hayward‘s Horace Hardwick and Charlotte Gooch was the perfect love interest with her performance of model and socialite Dale Tremont. The whole company showcased their talents in the large dance numbers, which were a delight for the whole audience.

The plot, a tale of lovers and mistaken identity, is by far the weakest aspect of the show. However it is told with such charm and gentle wit that alongside the incredibly staged dance routines, a lot can be forgiven. 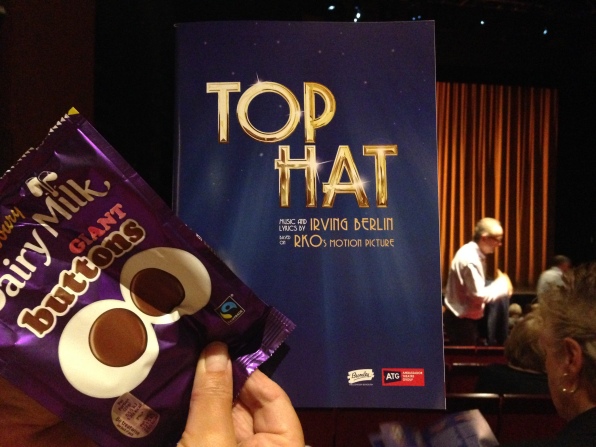 The true star of this production is the immense set, which dominated the stage of The Churchill Theatre, which is no mean feat as it’s a pretty big stage! The gorgeous art deco designs and furnishings, along with swift and inventive slides and set pieces transported the audience through the plot quickly, leaving just enough to the imagination. The costumes perfectly complement the sets, the sharpest gentlemen of the chorus I have ever witnessed on stage! I was particularly in awe of Dale Tremont’s white dress, which flowed with such elegance through the dance routines that I couldn’t help but wish I’d spent more time in ballet lessons as a kid!

Full of moments that left me smiling, and in awe of the incredible dancing on show, Top Hat was an absolute delight to be in the audience of and I wouldn’t hesitate to suggest it to my family and friends. The perfect antidote to a long commute home on the tube!

Top Hat is performed at The Churchill Theatre, Bromley until 21st June 2015.