If we take the assumption that sequels are never as good as their predecessors then by movie number six the Fast and Furious franchise should be down to the dregs. However, somehow this ultra successful movie series has built on the momentum of the early films and created a huge and dedicated fan base. Of course, the combination of fast cars, fit girls and fearless boys might have something to do with that. 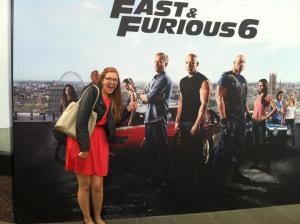 Justin Lin‘s Fast and Furious 6 takes places mostly within London, giving the film a slightly grubby edge which is refreshing, compared to the high gloss of some of the earlier Fast films. Londoners will enjoy seeing the cast race through the streets of the capital on unreasonably quiet roads, and the sights of London provide a new, if cluttered, back drop to the film. Vin Diesel‘s impossibly gravelly voice thunders through the cinema and his muscular stature pales in comparison to the frankly vast arms of Dwayne ‘The Rock’ Johnson whose role as Hobbs, Police Chief brings a new aspect to the unruly but loveable rogues that make up the Fast gang.

Fast 6 sees the return of the gorgeous Michelle Rodriguez as Letty, in a miraculous return after her supposed death. It was heavily emphasised at the World Premiere in London’s Leicester Square last night that her return was a decision based on the fans desire to see her back. Given that The Fast and Furious franchise is largely focused on speed and guns, it is in some ways reassuring to know the fans invest emotionally, as well as dribbling over the cars and huge action sequences. Speaking of action, there is absolutely no shortage of it within Fast and Furious 6, every time you think a chase or fight can’t get any bigger they manage to one up themselves resulting in two enormous action sequences at the climax of the film. Despite all this, I did find myself getting a bit emotional, proving that even in a movie so seemingly bullish in nature, there is a heart. My favourite performance came from Sung Kang as Han, his humour, emotion and cheeky grin gave his character a surprising depth that I wasn’t expecting to see in this kind of film.

A cameo appearance by London musician Rita Ora sticks out like a sore thumb, which is saying something given the ridiculous nature of some of the stunts in this film. If you like your movies action packed with car chases, shoot outs, fights and cliches then you will absolutely love Fast and Furious 6. Make sure you stay to the end for a teaser for Fast 7 and one of my guilty pleasures in terms of action stars makes a little appearance!